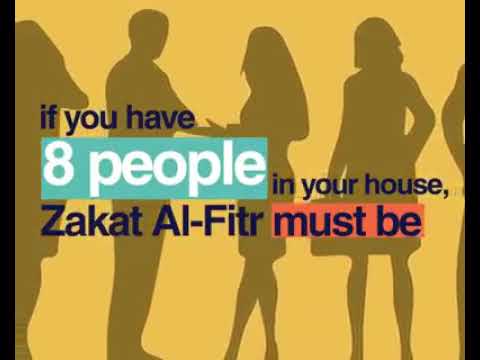 Zakat ul-Fitr is often referred to as Sadaqat ul-Fitr. The word Fitr means the same as Iftar, breaking a fast and it comes from the same root word as Futur which means breakfast. Thus, Islamically, Zakat ul-Fitr is the name given to charity which is distributed at the end of the fast of Ramadhan.

Sadaqat ul-Fitr is a duty which is Wajib on every Muslim, whether male or female, minor or adult as long as he / she has the means to do so. The proof that this form of charity is compulsory can be found in the Sunnah whereby Ibn ‘Umar reported that the Prophet sallallahu ‘alayhi wa sallam made Zakat ul-Fitr compulsory on every slave, freeman, male, female, young and old among the Muslims; one Sa’ of dried dates or one Sa’ of barely.{qluetip title=[1]}Collected by Bukhari – Arabic/English, vol. 2, p. 339, no. 579] (two handfuls / kilo / 40 grams / 4.5 lbs / 112 oz / beaker of dates, barley, raisins, cheese, grain of wheat (see Muslim no. 2151 & 2154). Some scholars say any topic of food that is common in a particular region can be given for fitr, (e.g. flour, ground beef, or milk in the United States){/qluetip}

The head of the household may pay the required amount for the other members. Abu Sa’id al-Khudri said, “On behalf of our young and old, free men and slaves, we used to take out during Allah’s Messenger’s sallallahu ‘alayhi wa sallam lifetime one Sa’ of grain, cheese or raisins.”{qluetip title=[2]}Collected by Muslim – English trans. vol. 2, p. 469, no. 2155{/qluetip}

The significant role played by Zakat in the circulation of wealth within the Islamic society is also played by the Sadaqat ul-Fitr. However, in the case of Sadaqat ul-Fitr, each individual is required to calculate how much charity is due from himself and his dependents and go into the community in order to find those who deserve such charity. Thus, Sadaqat ul-Fitr plays a very important role in the development of the bonds of community. The rich are obliged to come in direct contact with the poor, and the poor are put in contact with the extremely poor. This contact between the various levels of society helps to build real bonds of brotherhood and love within the Islamic community and trains those who have, to be generous to those who do not have.

The main purpose of Zakat ul-Fitr is to provide those who fasted with the means of making up for their errors during the month of fasting. Zakat ul-Fitr also provides the poor with a means with which they can celebrate the festival of breaking the fast (‘Eid ul-Fitr) along with the rest of the Muslims.

Ibn Abbas reported, “The Prophet sallallahu ‘alayhi wa sallam made Zakat ul-Fitr compulsory so that those who fasted may be purified of their idle deeds and shameful talk (committed during Ramadhan) and so that the poor may be fed. Whoever gives it before Salah will have it accepted as Zakat, while he who gives it after the Salah has given Sadaqat.”{qluetip title=[3]}Collected by Abu Dawud – Eng. trans. vol. 2, p. 421, no. 1605 – rated Sahih by Shaykh Nasir al-Albani{/qluetip}

Hence, the goal of Sadaqat ul-Fitr is the spiritual development of the Believers. By making them give up some of their wealth, the believers are taught the higher moral characteristics of generosity, compassion (sympathy for the unfortunate), gratitude to God and the righteousness. But, since Islam does not neglect man’s material need, part of the goal of Zakat ul-Fitr is the economic well-being of the poorer members of society.

Zakat ul-Fitr is only Wajib for a particular period of time. If one misses the time period without a good reason, he has sinned and can not make it up. This form of charity becomes obligatory from sunset on the last day of fasting and remains obligatory until the beginning of Salat ul-‘Eid(i.e. shortly after sunrise on the following day). However, it can be paid prior to the above mentioned period, as many of the Sahabah (companions of the Prophet sallallahu ‘alayhi wa sallam) used to pay Sadaqat ul-Fitr a couple days before the ‘Eid.

Ibn ‘Umar reported that the Prophet sallallahu ‘alayhi wa sallam order that it (Zakat ul-Fitr) be given before people go to make the Salah (of ‘Eid).

Nafi’ transmitted that Ibn ‘Umar used to pay fitr a day or two before the ‘Eid prayer.{qluetip title=[4]}Bukhari vol. 2, p. 339, no. 579 & Muslim, Abu Dawud{/qluetip} Whoever pays fitr after the ‘Eidprayer wlll not get the blessings of it because it will be rendered as regular Sadaqah (see Abu Dawud no. 1605).

And Ibn ‘Abbas reported that the Prophet sallallahu ‘alayhi wa sallam said, “Whoever gives it before the Salah will have it accepted as Zakat, while he who gives it after the Salah (will not, for it will only be considered as) ordinary charity. Therefore, one who forgets to pay this Zakat ul-Fitr on time should do so as soon as possible even though it will not be counted as Zakat ul-Fitr.”

The amount of Zakat is the same for everyone regardless of their different income brackets. The minimum amount is one Sa’ (two handfuls) of food, grain or dried fruit for each member of the family. This calculation is based on Ibn ‘Umar’s report that the Prophet sallallahu ‘alayhi wa sallam made Zakat ul-Fitr compulsory and payable by a Sa’ of dried dates or a Sa’ of barley.

Items other than food such as money, clothes, furniture, etc. cannot be given as Zakat ul-Fitrbecause it is contrary to what the Prophet commanded and what Allah wants. The Prophet sallallahu ‘alayhi wa sallam said, “Whoever introduces anything in this matter (din) of ours will have it rejected.” {qluetip title=[7]}Bukhari vol 3 no. 861, Muslim no. 4266, Abu Dawud no. 4589{/qluetip}

Not giving money for fitr is as Sunnah at-Turkiyyah (an action, the abandonment of which is a Prophetic Sunnah). Money existed and was prevalent in the Prophet’s time but he did not nor did the Companions or Tabi’in (followers of the Companions) use any money for Fitr. For sure the Prophet sallallahu ‘alayhi wa sallam was, is, and always will be the best of worshippers and the Companions and Tabi’in are the best of generations in understanding and practicing Islam.{qluetip title=[8]}See Al-Qur’an 4:115 and 3:110, Bukhari vol 3 and 5, Abu Dawud no. 4586{/qluetip} So if he and they did not use money for Sadaqat ul-Fitr why should any one else?

(s) Compiled from the works of the two authors