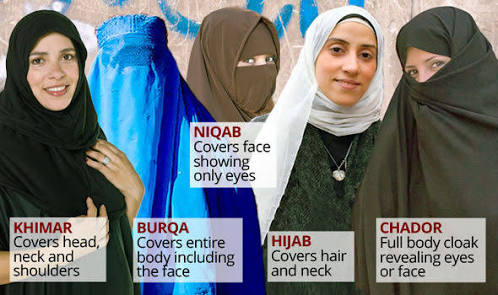 Why Allah (swt) Decreed The Burqah/hijab For The Females

Why Allah (swt) Decreed The Burqah/hijab For The Females

In recent times the hate for anything Islam especially the way Allah decreed for our females to be dressed in hijab and the burqah keeps increasing. This little explanation will show some of the benefits. May Allah grant me wisdom.

Almighty Allah created men with insected eyes. Men are moved by sight. Most men regardless how strict and stern they are and like to appear, when they see a lady, first thing that pops into majority’s head is sex. This is why men were told to lower their gaze Quran 24:30 “Tell the believing men to reduce [some] of their vision and guard their private parts. That is purer for them. Indeed, Allah is Acquainted with what they do.”This is why most men are prone to cheating in their relationships because of the way he created men, he has also allowed them have multiple wives. So long as he has the capacity to provide for them.

Men are not only moved by sight but also by touch. For some men, a simple handshake is enough to get them erected, for some a hug. There are cases where even speaking over the phone with your girlfriend or wife can get you erected. All of these tells us that men are easily moved and are quick to think of sex. For most who don’t know. In Islam our women are regarded as queens, that’s why a man is not allowed to touch hands with any other female except his wife. If a woman’s voice is capable of provoking erection over the phone. It may make sense to you why women do not call the adhan.

Now Allah knowing that the charm of a lady is powerful enough to mislead a man into doing the wrong thing, (Rape, lustful looking, etc) decreed the burqah for muslimahs in other to cover not only her dignity but to cover the sexual appeal of females.

Parts of the benefits of wearing the burqah/Hijab is this.

1. We all know the females in these times love to show off their beauty and brag about who has the hottest hourglass figure. If every woman puts on the burqah/Hijab. There will be no need for showing off their beauty and trying to outdo each other. You are all covered up. Allah (swt) sees everyone as the same. Covering yourself up will not only protect you from being prideful of your beauty, but it will also make you humble and see everyone else as the same. Moreover you are covering yourself for your husband, do not let your goods be adored by another man to the point where he will be tempted of harassing you.

2. We live in a world now where body shaming and slut shaming is the order of the day. Women are being abused for having saggy boobs and a body defect or being ugly. Should every woman be clothed in the burqah/Hijab, no man would be opportuned to assess any woman, since all of their attributes will be concealed. No one can body shame anyone when they are properly covered in burqah/Hijab. The body defect or saggy boobs of every person is covered, there will be no opportunity to make anyone feel bad about their body. But Shaitan with is use of the media wants everyone to be deceived into thinking muslimahs are oppressed. Therefore he wants every female to live as they want.

4. Females love to show off and make statements with their fashion. Yes we all like to dress well so that we feel good about ourselves. But females do it for a lot of reasons some for showing their figures, some just to oppress their female colleagues etc. We see how women dress with cleavages open and fitted attires that pronounce their shape. Should every woman be clothed in burqah. You have no need to worry about fashion, you have no need to oppress your muslimahs. Everyone is clothed in the same attire. Remember Allah (SWT) Sees everyone as the same.

But you see it is the opposite that is going on in the world now. Women becoming models, all of these are the lies crafted by Shaitan to oppose what Allah decrees. Female models who come out openly to flaunt their skin and even sexualize females more. Deceitfully he makes women think since they are making money by showcasing their beauty and body. They are being confident and not oppressed.

Women, you don’t like your man looking at other women because he has you, not to talk of sharing his winnie with another woman. But when it comes to preserving your own body for the same reason. (Not letting other men gaze on your body) You scream oppressed. It’s surprising that Shaitan has deceived many into thinking that women are oppressed. When it is supposed to be women advocating for the use of hijab and burqah by other women. Then your husband/man has no need to look further at anything because everyone is all covered.

Allah holds women in high esteem and expects every female to hold herself with high regard. So covering yourself is giving you dignity. Your sexual appeal is your dignity. The dignity that only should be enjoyed by the presence of your husband. Now women ask yourself, No woman likes to share her man with any other woman. You all want him all to yourself. So why then would you decide to share the your diginty with others to feast on.

Now I know some will jump on the thread and say why don’t men cover themselves up too so that it becomes equal. Now think what provocative part of men is there that turns women on? Most of the clothing of men covers the crotch, groin and all necessary part. Moreover, men aren’t known for seducing, if men were to dress provocatively women out of their pride/ dignity will never come out openly to say they are being tempted by a man’s look. Even if they are they would rather mum it. But these days it has been made to look normal for women to ask guys out and openly lust on men too. We all know it is women who have the power of seduction. Most women will ignore any man that tries to seduce them.

The truth is that even sometimes men who intend to do evil will because of a way a woman is dressed avert his evil intentions. We know no woman deserves to be addressed shamefully or sexually harassed. But men who are still lowly in nature wouldn’t think twice on acting on instincts.