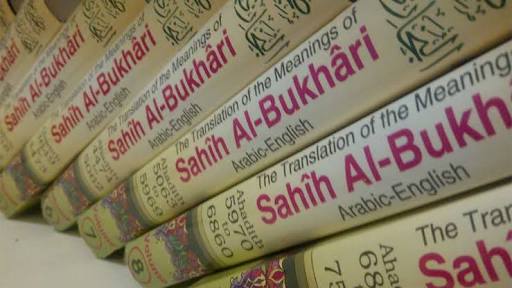 It was narrated on the authority of Umar (may Allah be pleased with him), who said:

While we were one day sitting with the Messenger of Allah (peace be upon him), there appeared before us a man dressed in extremely white clothes and with very black hair. No traces of journeying were visible on him, and none of us knew him. He sat down close by the Prophet (peace be upon him), rested his knee against his thighs, and said, “O Muhammad! Inform me about Islam.”

The Messenger of Allah (peace be upon him) said, “Islam is that you should testify that there is no deity except Allah and that Muhammad is His Messenger, that you should perform salah, pay the Zakah, fast during Ramadan, and perform Hajj to the House, if you are able to do so.”

The man said, “You have spoken truly.” We were astonished at his questioning him (the Messenger) and telling him that he was right, but he went on to say, “Inform me about iman.”

He (the Messenger of Allah) answered, “It is that you believe in Allah and His angels and His Books and His Messengers and in the Last Day, and in qadar (fate), both in its good and in its evil aspects.” He said, “You have spoken truly.”

Then he (the man) said, “Inform me about Ihsan.” He (the Messenger of Allah) answered, “It is that you should serve Allah as though you could see Him, for though you cannot see Him yet (know that) He sees you.”He said, “Inform me about the Hour.” He (the Messenger of Allah) said, “About that, the one questioned knows no more than the questioner.” So he said, “Well, inform me about the signs thereof.” He said,“They are that the slave-girl will give birth to her mistress, that you will see the barefooted, naked, destitute, the herdsmen of the sheep (competing with each other) in raising lofty buildings.“ Thereupon the man went of. I waited a while, and then he (the Messenger of Allah) said, “O Umar, do you know who that questioner was?” I replied, “Allah and His Messenger know better.” He said, “That was Jibril (the Angel Gabriel). He came to teach you your religion. Muslim

The Significance of this Hadith

This hadith includes within it all outwardly actions and inwardly beliefs. The sciences of the Sharia’ return back to this hadith due to it encompassing knowledge of the Sunnah. Hence, some of the scholars have termed this hadith the Mother or Core of the Sunnah, just as Surah al-Fatiha has been termed the Mother or Core of the Qur’aan, due to it containing the entire Message of the Qur’an.

It is very important for du’aat (Islamic workers ) to be aware of their surroundings, and to recognize what’s going on around them so they can act appropriately. Umar (ra) noticed that a well-kept individual with clean clothes, whom he didn’t know, entered the Masjid with no trace of travel on him. Umar (ra) was conscious; he could sense that this man was not an ordinary man, nor a man from “around town.”

The da’wah, the call to Islam, is very much predicated upon the building of relationships with people. The people who care about inviting others to Islam and spreading the deen of Allah (swt), should notice what’s going on around them. They should notice when someone new comes into the masjid. They should notice if someone is left out or if someone is sitting by him or herself. Then they can proceed from there in terms of figuring out how to deal with that situation. The call towards the deen of Allah is predicated upon brotherhood, sisterhood, love for the sake of Allah; and that requires paying attention to the situations of people around us.

Jibreel (as) came dressed in a very nice and clean way. He sat in front of the Prophet (pbuh) in a very respectful and humble way. There are many things that the scholars took from this Hadith in terms of seeking knowledge. Among the etiquettes of seeking knowledge is students should have decent apparel, they should look clean as much as possible. Moreover, they should show a high level of respect towards their teachers.

Belief manifests itself. The scholars say that a belief lives in the heart and shows itself on the actions and on the tongue. For example, the Prophet (sas) said that the Muslim is the person who the people are safe from his hands and his tongue. And the believer is the one who people trust him with their wealth and themselves.

Scholars consider Islam, Iman and Ihsan the three stages in the path towards Allah (swt). The first path is you force yourself and bring yourself to do those actions which you know that Allah wants you to do. The second level is iman where you are not only doing those actions, but you are strengthening your relationship with Allah (swt) and you’re beginning to taste the sweetness of your relationship with Allah. The third level is the level of Ihsan, which is to worship Allah as if you see Him, and even if you cannot see Him, to know that He sees you. So, you are moving in this path, this journey, towards the Divine. And in doing so, it’s getting more and more intense.

When Jibreel asked the Prophet (sas) about the hour, He said, “The one who is being asked about it is not more knowledgeable about it than the one who is asking.” Here, the Prophet (sas) is saying, this is something that Allah (swt) keeps to Himself and it is part of the “ghayb” (unseen). This is an important lesson because it doesn’t matter when the Day of Judgment is, what really matters is what and how we are preparing for it. We should be continuously striving to please Allah and seek his forgiveness.

The next question was, “So, tell me about it’s signs, tell me about the things that will occur”. These signs are considered as warnings. The Prophet (sas) gave two signs to this particular hadith of the end of time. One of them is, “the slave woman will give birth to her master,” and the tense is feminine so it is referring to her female master.

One of the interpretations that relates to modern time would be: The one who gives birth is supposed to be in power, or have some sort of level or authority over the one who she gives birth to. But this here is a flipping of the scale. The one who gives birth becomes the servant of the one who is born. Whereas before, the child would respect, honor and listen to their parents. Now it’s the complete opposite, and if you look around, you will see it. You see and feel as if the parents are slaves to the children. Parents desperately trying to please their children, and moms are trying to imitate their daughters.

The second sign; is the person will see barefooted, lightly dressed, and poor people who are shepherds. They will see these people competing with one another in their buildings. The point here is you have these people who don’t have anything, they are very poor. Then suddenly the situation changes for them, and they are competing with one another over who can build the tallest building. They are competing to see who has the nicest car, the latest gadgets, etc.

In the end, all of this is from the blessings of Allah (swt). Allah (swt) gives us so much and rather than being humble and grateful in front of Allah, we are arrogant and think that it is all from us. Righteousness, putting full effort and trying one’s best will all eventually lead to success and wealth. But at the end of the day, we still have to acknowledge that no matter how much effort we put in, our wealth and success will always be in the hands and bounty of Allah. So, being successful and having wealth should give us more reasons to increase our humility and increase our gratitude towards our Lord.