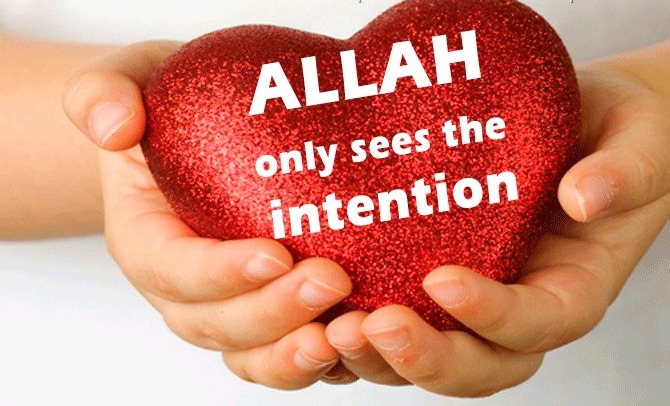 Hadeeth 1: Actions are by Intentions

Your Intentions, Your Actions

On the authority of Ameer ul-Mu’mineen (the Commander of the Faithful), Abu Hafs `Umar ibn al-Khattaab radiAllahu anhu, who said: I heard the Messenger of Allah ﷺ say:

It is related by the two Imaams of the scholars of Hadeeth, Abu `Abdillaah Muhammad ibn Ismaa`eel ibn Ibraheem ibn al-Mugheera ibn Bardizbah al-Bukhari and Abu-l-Husain Muslim ibn al-Hajjaaj ibn Muslim al-Qushairee an-NaisaAburee, in their two Saheehs, which are the soundest of compiled books [i.e. the most truthful books after the Book of Allah, since the Qur’aan is not ‘compiled’].

This is a saheeh hadeeth that has been agreed upon by the scholars, and is collected in both the collections of al-Bukhari (Hadeeth No. 1) and Muslim (Hadeeth No. 1907). This hadeeth is great in its benefit and importance, and it has been said that the religion of al-Islaam revolves around it. Some of the scholars have said that it is 1/3rd of Knowledge, because the actions of man involve his heart, his tongue and his limbs, and hence the intention in the heart is 1/3rd of that. Other scholars have said that the whole religion is encompassed in three hadeeth – this one, the hadeeth “The Halaal is clear, the Haraam is clear and between them are doubtful matters…”, and the hadeeth
“Whoever innovates in this religion that which is not from it will have his actions rejected [by Allah]”. [Note: These other hadeeth will be covered later in shaa’ Allah]

Some of the scholars have said that this hadeeth should be mentioned at the beginning of every book, in order to establish that the seeking of knowledge is for the sake of Allah alone, and not for anyone else.

In the hadeeth, when the Prophet ﷺ says “actions are but by intention” then the ‘by’ here means that the acceptance and correctness of any action depends upon the intention behind it. An action which is apparently good, such as giving money in charity, will be rejected if the intention behind it is wrong, for example: to show off. Indeed, the Prophet ﷺ has narrated from Allah that if a person performs an act for Allah’s sake and also for the sake of someone else, then Allah will reject the deed entirely and leave the whole of it for the partner that the person made. This shows us how grave the sin of shirk is – it is the only sin that Allah will never forgive.

The word “actions” refers to those actions which are part of the Sharee’ah of Islaam. Thus, any action of the Sharee’ah – such as making wudoo’, or ghusl, or making tayammum, or the prayer, or zakaat, or fasting, or the Hajj, or i’tikaaf in the masjid, or any other act of worship – will not be accepted and rewarded unless it is performed with the correct intention.

Everything we do has to be intended to be for Allah, i.e., for anything we do we want to make sure that it will be acceptable to Him and will not in any way interfere with the upholding of His Deen. A good action with the wrong intention will not get us any reward in the Hereafter.